Cottage Pie (or Shepherd’s Pie… depending on your perspective).

Well, dinner tonight was supposed to be Chicken Pot Pie…. but the chicken looked a bit unusual, so I decided to pass and grabbed a package of frozen ground beef and switched the menu to Cottage Pie…. or as most of my American audience would see it… Shepherd’s Pie.

Just to clarify, as the name would suggest, Shepherd’s Pie should be made from lamb, not beef and it doesn’t have any extra veggies, so cottage pie it is.

My original recipe for this comes from Gordon Ramsay, so credit where credit is due, click here for that recipe. However, I tend to cook reality food… meaning, I use whatever I have in the refrigerator and take it from there, so any resemblance to the aforementioned dish is probably entirely coincidental!

Okay, so here we go.

Put a pan of salted water to boil.  Chop potatoes in half and add to pan.  No need to peel.   If you cook the potatoes in their skins they retain more of the nutrients and you can just peel the skin off after.  I hate peeling potatoes, so I didn’t have to be told this twice!

Edit : (Note to self.  Next time when photographing unpeeled potatoes, try to make sure the one that looks like it has the plague is in the BOTTOM of the pan…. haha!  It tasted fine mashed, honest!) 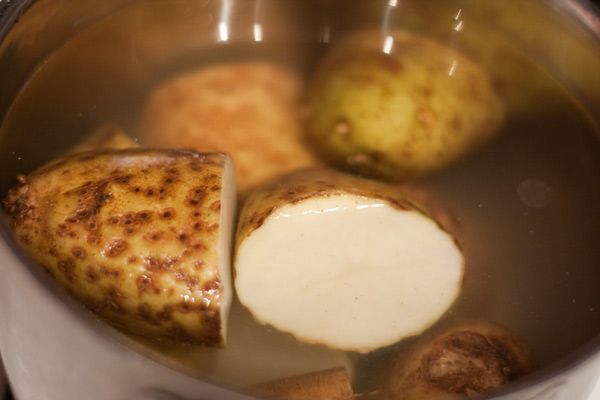 Peel and dice, as small as you can, an onion.   I only used a half the onion although it’s personal preference.  Also peel and dice a couple of carrots.  I had a bag of those baby carrots that needed to be used up, so I used them. 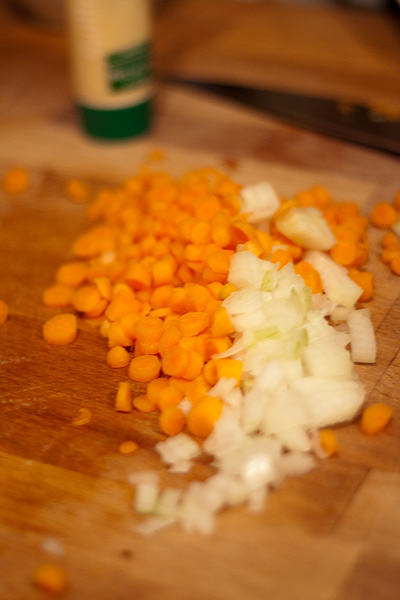 At this point in the proceedings, I had to run to the store for tomato paste.  Belted out some Christmas tunes in the car on the way back and we’re ready to go again. 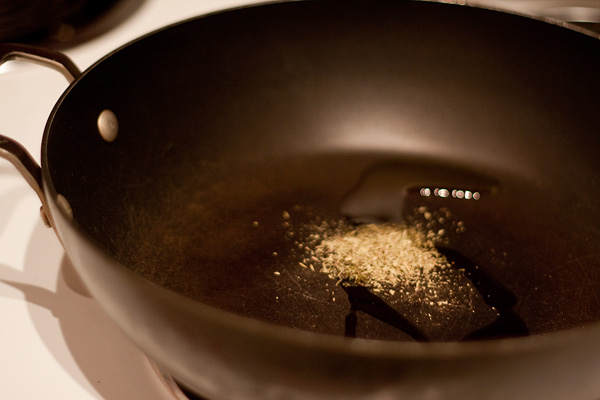 Add Ground Beef, Onions and Carrots.  Add Garlic.   I have to say I do like the stuff in a tube.  I don’t mind crushing and chopping my own, but for convenience sake, this stuff is great. 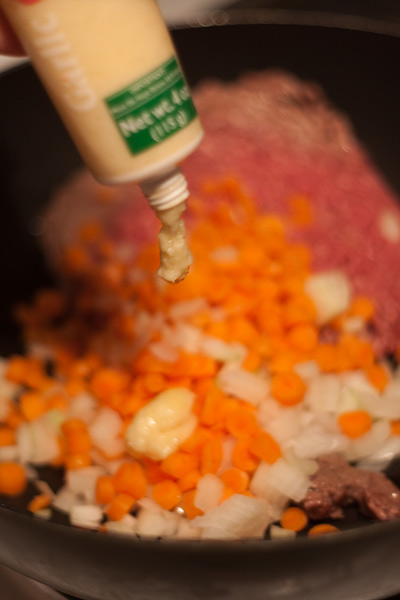 Salt and Pepper to taste. 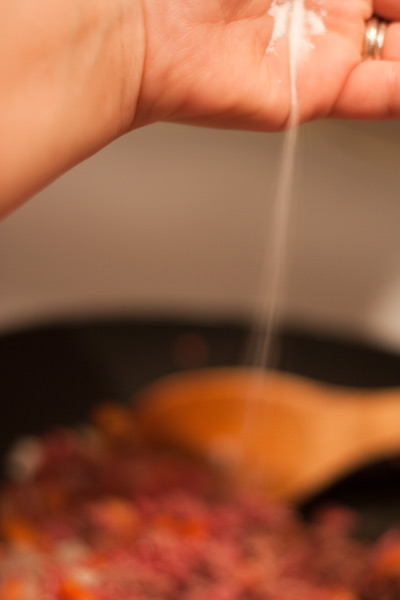 Cook on a medium heat until the beef is thoroughly cooked and the carrots are starting to soften. 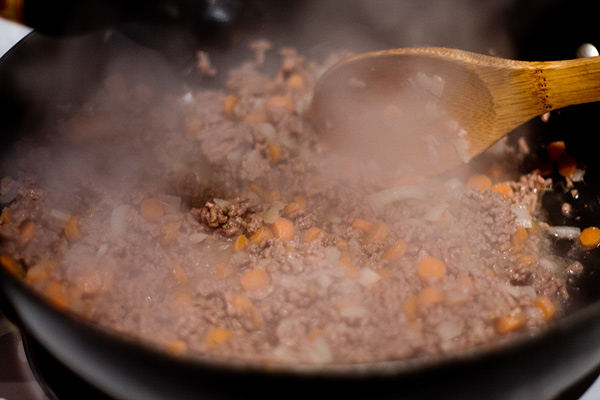 Add Worcestershire Sauce.    I cannot give precise measurements on this, because I love the stuff and probably add a couple of tablespoons.   Gordon says : “several splashes” so I’d go with that to begin with.   Also, if you add more, be careful with your salt as the sauce is pretty salty. 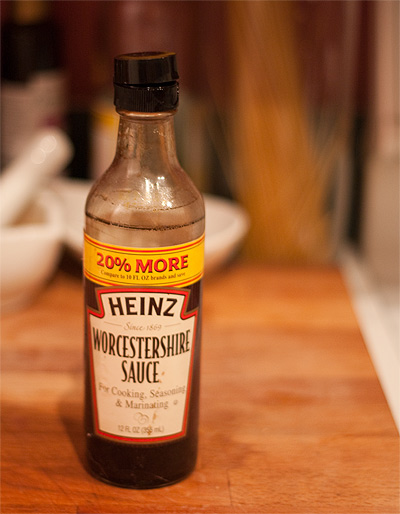 Add about a tablespoon of Tomato Paste. 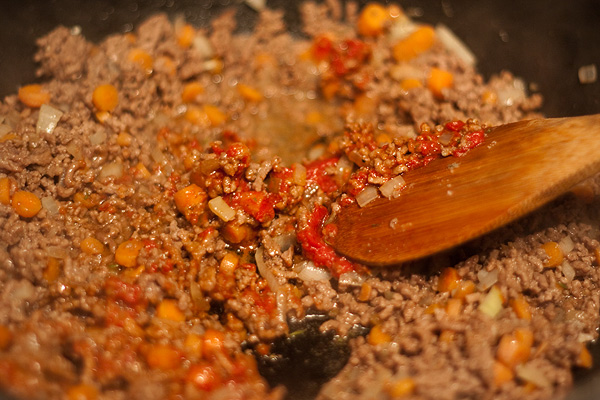 Add a generous couple of glugs of red wine.  So, probably about a half a glass.  It was at this point when I realized I hadn’t got any.  I always, and I really do mean always, have a bottle of red in the kitchen to cook with, so this was a horrifying development.   Unwilling to head back to the store, I had to hit up the Gluhwein (a German Mulled Wine).  Honestly, you couldn’t really tell the difference in the end product… haha!  (Recipe for Gluhwein coming at a later date!)

The potatoes were done, so I dropped them into a strainer in the sink and peeled off the skins.  Piece of cake!   Do the job under cold running water so you don’t burn your fingers and it’s fine.  The potatoes don’t lose a lot of heat either. 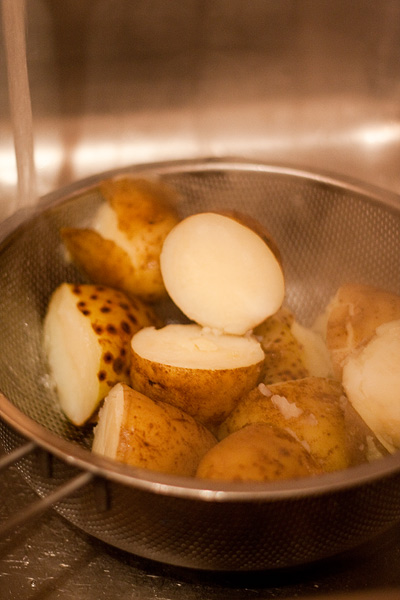 Left over skins…. so you can see how little of the potato you lose doing this.  Of course you could actually mash the skins in with the potatoes if you chose to do so.  My kids are picky though, so no delicious, nutritious skins for us! 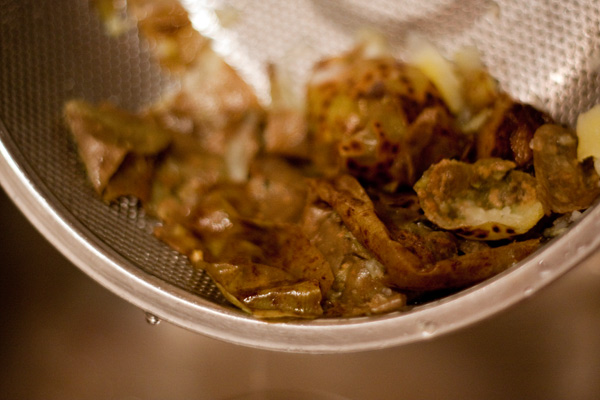 Mash your potatoes.   I add milk and butter.  Gordon adds cream and egg yolks and parmesan cheese, but I’m keeping it real here and I don’t have that stuff in my fridge.  Anyway, it doesn’t really matter. Mashed potatoes is mashed potatoes for goodness sakes.  Just do it! 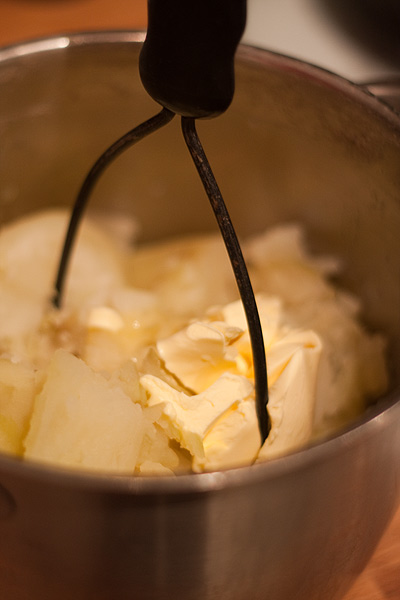 Oh alright…. let’s throw in some cheese too.   Mixed Mexican Kraft style.  Works for me! 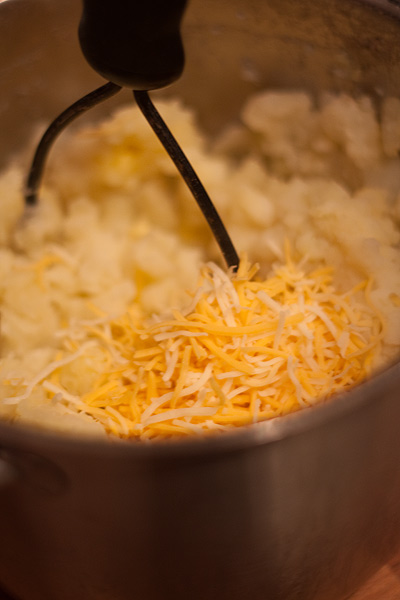 I will normally serve this with peas on the side… or even better, vegetarian baked beans.  But tonight I’m making individual pies and it’s a bit difficult to eat with peas on the side, so I’m throwing them into the mix also.   Frozen peas.   See, you can still see the frost on that pea in the front.

Talking of peas, we went to family for Thanksgiving and I was adamant that I had to have peas with my Turkey.  I don’t know why, but it’s tradition for me, so just go with it.   Apparently my sister is the same way, so it must just be a family thing!  Anyway, when I got there they served canned peas.   I’m sorry, but I don’t care what brand it is, canned peas are just icky, icky, gross.  There’s something about that grey green colour that turns my stomach.  Probably years of watching people eat mushy peas in the UK. 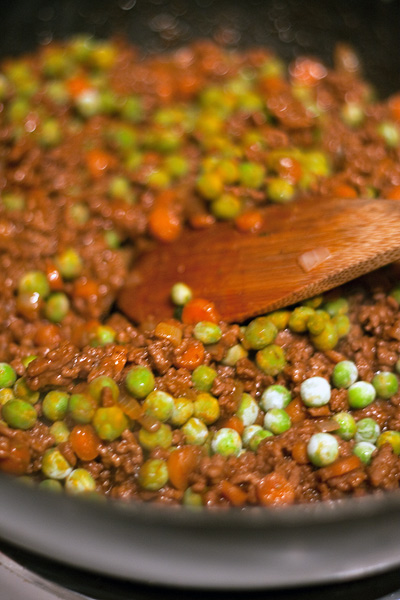 Anyway, back to topic.   Let cook for a couple of minutes until your carrots are soft and your peas are no longer iced.  Spoon into your serving dish, or in my case… dishes.    Ooooo.. check out that wonderful Christmas Tree bokeh!  (Bokeh = sparkly circles in the background for you non-photog types).  I know you can’t see much of the food, but the bokeh is amazing!   Ha! 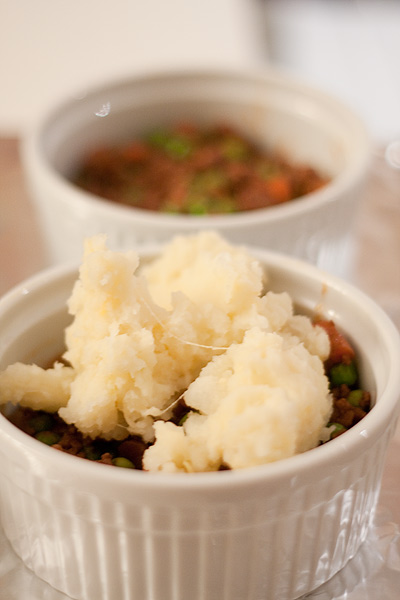 Spread evenly over the meat mixture.  I “fork” the top.  The more little tufts you make, the better the crispy top is, in my opinion…. 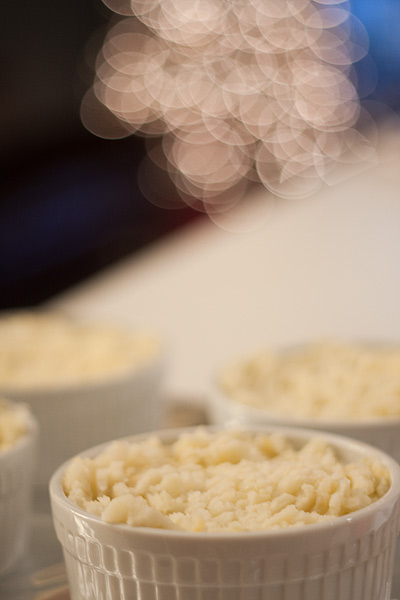 Oooo.. more of that pretty sparkly stuff!   I think I was a magpie in a former life.

Anyway, you can add cheese to the top if you wish, but I really don’t think it needs it.  I sometimes do, just to mix it up a bit, but more often than not, I don’t bother.

Off topic again, well sort of.  My cousin once said to me : “You guys eat a lot of cheese in England!” and I burst out laughing.  For one, I don’t know where she gets her information, I really don’t… and for two, this is coming from an American?  Have you ever looked at a menu in a Restaurant over here?   I defy you to find me a menu item that doesn’t have cheese in it, or in the sauce that goes on it or next to it.   Okay, so you can probably find one or two, if you’re lucky, but you see my point!  Some places even come over to you afterwards and ask : “Would you like extra cheese on that?”

Back on topic again… ha!  Put in oven.   About 350 for about twenty minutes… or until it’s getting nice and golden on top.

Go find something to do whilst it’s cooking … 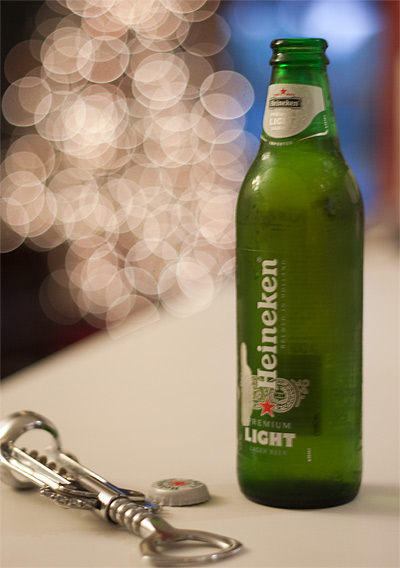 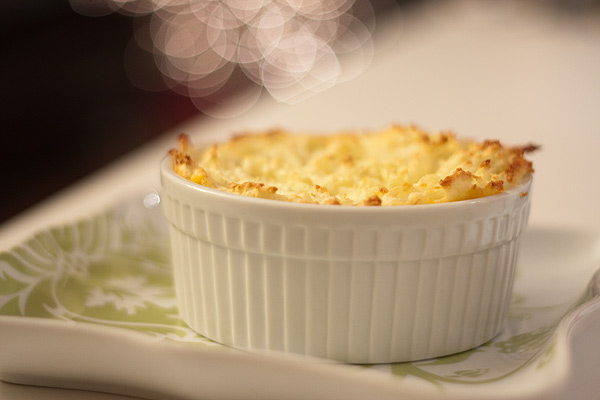 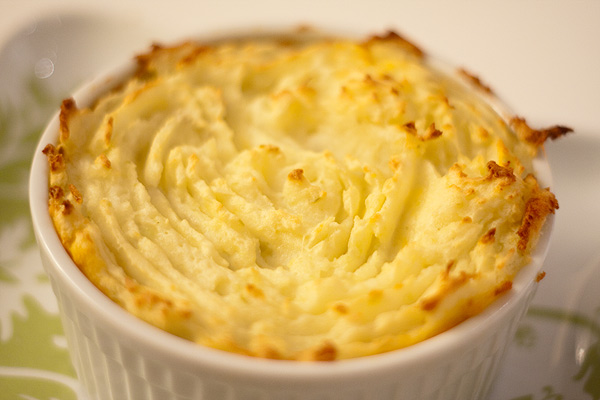 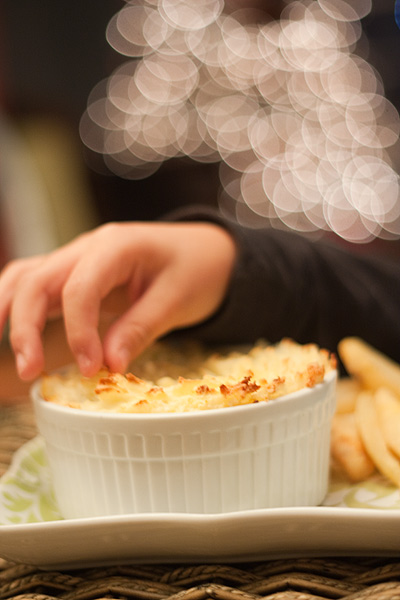 Served in our house with Fries (because I’m English and we don’t need an excuse to double up our carbs) and a healthy dose of attitude (because we don’t want to sit at the table, we want to watch Spongebob!) 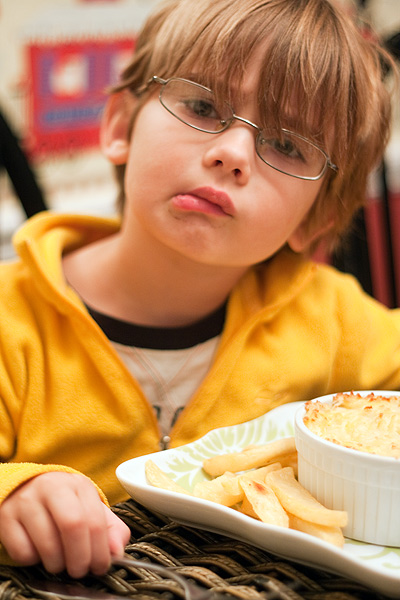 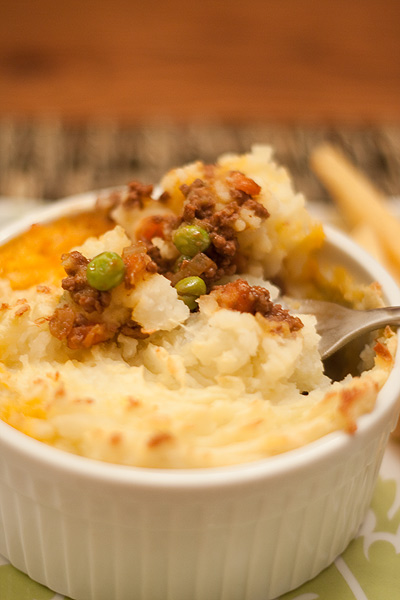 We also serve it with HP Sauce.  It’s an English delicacy… much like Tomato Ketchup!  You can get it in your World Market or probably any store  that has a British Food Section.  It’s basically just more Worcestershire Sauce… only in more of a “sauce” form. 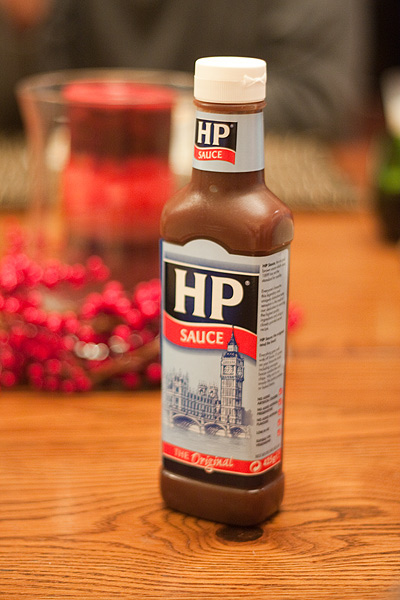 And there you have it.  Cottage Pie (or Shepherd’s Pie) a la me.  My first food blog.

Eccentric Mother, Loving Wife. Addicted to creating all kinds of everything!
Previous Post

Is it all children?

How I miss my English Christmas ...

Wife. Mother. Artist. Maker. Realtor. Born in the UK. Home in the US. A Husband. Two Children. Two Dogs and Three Turtles. My Stories.

Creating a Productive Atmosphere while you #stayhome !

I promise not to spam or share your information with anyone.